On Monday, we thought we would go on our first big Washington adventure. It was a spontaneous decision but it was a beautiful day and we refused to stay inside.

We decided to make the hour and a half drive to Sequim so we could go to the Olympic Game Farm.

The drive was great because we had an incredible view for most of it.

We stopped for a potty break at a store that has a fountain garden out front. The kids enjoyed it quite a bit. I bet they wouldn’t have minded if we stayed there all day! 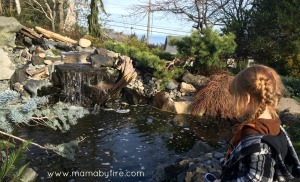 However, there were animals to see and being a holiday (President’s Day), we knew the place would get busy.

So we continued on.

There were plenty of other places to stop along the way. Next time we go, (when the kids are older and would be up for more than one thing in a day), we’ll be stopping at one of the lavender farms. Maybe even the Native American Museum, that just happens to be right on the water.

The Olympic Game Farm is one of those places where you drive around the entire place feeding animals as you go. There were signs throughout the farm stressing that the animals can only have 100% whole wheat bread. We bought three loaves from them so we didn’t have to worry about it.

We got to feed a huge array of animals, but the highlight for the little lady was seeing zebras so close. They were gorgeous!! 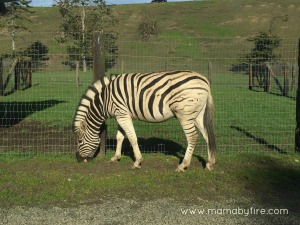 One of my highlights was the Bald Eagle that was hanging out in the grass. As soon as we were right next to it, it took off-man, their wing span is amazing!

I forgot how aggressive the Bison are from the last time my husband and I went (before the kids were born). I won’t forget again. Their tongues are really long. They wrap them around the bread like a snake, it makes it impossible to feed them without touching their tongue. They look dry, but they are so drooly!

Once you’re ready to move on to the next animal, the bison have something else in mind. There’s a horrible feeling you get in the pit of your stomach when a gigantic bison is running alongside your car. At least we were in an SUV…

The kids had a great time! It was amazing seeing such a huge variety of animals that close!!

This adventure was fairly inexpensive. We kept the cost down by packing a lunch.

So, the total cost for this trip:

Total was $43 for the whole day and the kids will remember it for a long time.

We have a string of bad weather for the rest of the week, so I’ll have to get creative so the kids don’t go stir crazy.

What types of adventures does your family like to go on? Have you ever been to a game farm where you can feed the animals as you go?