Ah, the days before kids.

When we would stay up as late as we wanted because we could sleep in.

Leave the house on a moments notice, just because we thought it would be fun to meet up with a friend.

When we had perfect hygiene because we took showers daily.

And when we could judge other people’s parenting because we had absolutely NO CLUE what they were up against.

The last one got me thinking about what I used to judge, and what I’m very likely judged on now.  I came up with ten things I thought I would never do.

Of course you can have some of my juice!  As long as you give back the remaining juice/backwash so I can finish it off.

2. Touch another person’s boogers. Now, I do this at least once daily, and when baby is sick, I lose count.

3. Talk about poop. I don’t like poop jokes, or farting jokes, and I definitely don’t like talking about either.

There is no longer a day that goes by when I don’t at least mention some sort of BM.

4. Skip out on plans with a friend because of a nap. My life revolves around my children’s naps, if you can’t accept that, we can no longer be friends.

5. Nurse in public-without a cover.

I tried to with one, for a very long time.  My baby is weird. He doesn’t like eating under a blanket, so he pulls it off. I then flash everyone within ten feet, thus defeating the purpose of the cover in the first place.

6. Not always tell the truth.

We want to raise honest, upstanding people, here.  I always knew Santa Claus would be part of the deal, but he actually exists in spirit.

Maybe they’re hurt! They may feel abandoned! They might be tired and just need a hug!

Or, maybe the kid is just pissed off they didn’t get their way.  I can sometimes look at my toddler wrong and she will launch into the most amazing tantrum that ever was. So, yes, sometimes, the kid just gets to cry (or scream.) 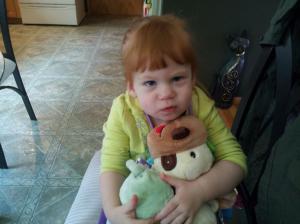 8. Chew someone else’s nails. This one still grosses me out a lot (more than the boogers!).

I file my kids nails as often as I can, but the boy usually will have none of it. I used to just deal with it, but then he got grabby and scratchy while nursing.

With scratches all over my face, chest and arms, a lady has to take action. So, I chew them off. He thinks it’s funny. I try not to vomit.

9.  Talk about my kids.  To everyone.  All the time.  It’s only when the non-parent’s eyes start to glaze over in disinterest that I know I have a problem.

10. Want to stay home. I always thought I would at least have a part time job when my kids were babies. Once my first was born, I realized, I couldn’t imagine leaving her.

Sure, I have my crappy days where I want to leave as soon as my husband comes home and never look back. But when I think about leaving my children at a daycare everyday, I feel anxiety kick in that I never knew I had.

What do you do as a parent that you never thought you would do?